The Klem panel connector was included in the permanent collection for Industrial Design at the Museum of Modern Art (MoMa), New York, N. Y. in 1970.

The Museum of Modern Art is one of the most important and influential collections of modern and timeless art in the world.

The Austrian State Price was conferred on the Klem connector system in 1980. The KlemLite halogen light also won this award in 1987.

In the Republic of Austria, a State Price (national award) is understood to be a national distinction which includes a financial award and which is issued by a federal government department.

In addition to orders of merit and honorary titles, national awards are among the most important awards in Austria.

The Klem connector was distinguished with the Busse Longlife Design Award in 2005.

This prize is awarded every three years to a designer product which has succeeded in the market for over eight years. The products must be of high quality with regard to form, function, and ergonomics and the look, feel, and design of the form must have remained the same throughout the years.

Compared to competitors, the unique advantage is found in the captive dual inserts made of synthetic rubber which suction onto the panel surface under pressure and therefore create a secure connection. 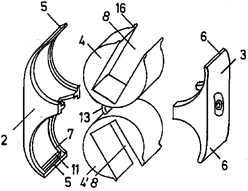 The patented Klem Connector in our Online Shop